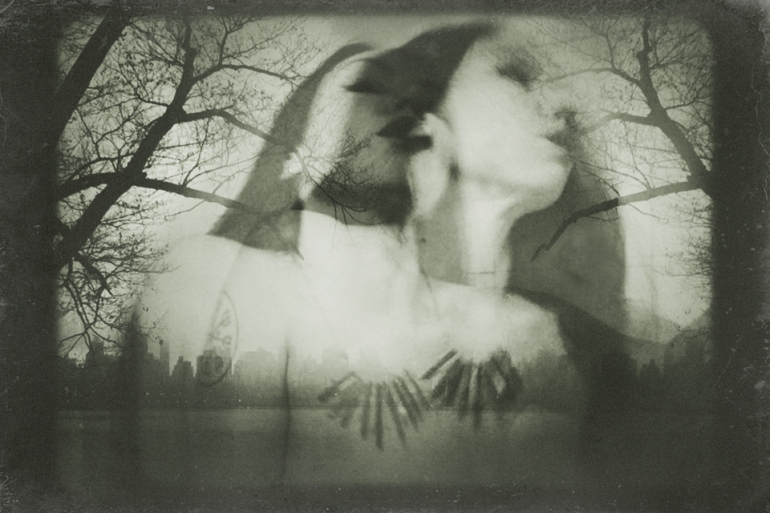 “Where do you go Mary? In the dead of night?”

The air felt thick with rain again, the second of the series of storms. I stood on the shore of Hallet’s Cove watching wilted flowers as they rolled back and forth with the waves. By the roots of the tree were two devil pods. Two bat nuts to bring home. They aren’t found by these waters. The man at the crossroads had left them for me. I was born a storm child, lover of poisonous things, belladonna, primrose, foxglove, and climbing nightshade.  I would taste the berries and petals, dance in fairy rings, and conjure rain and thunder. At age six I became sickly, scarlet fever, fifth disease, and chicken pox three times in a matter of three years. And then of course the seizures came. With those brought visions of the spirit world. Science could explain why I had them but it couldn’t explain the accuracy of them or why the fever dreams opened the door to something else. I wanted to know the frequency of being haunted, not by spirits but of things, places, and memories. Would the object’s frequency be so low that it generated infrasonic memory vibrations or was it my own body creating it within. Perhaps subconsciously I wanted to be haunted.

I became a child of the crossroads, a daughter to both Eleggua and Fortuna. I read palms, threw dice, and traced facial features with my eyes connecting personalities from freckles, traits, and shapes. The mole above my lip assured I would always be taken care of. The one under my eyebrow signified power and success. The x on both my marriage lines spoke of finding the same love in each lifetime I lived. My hands were the hands of my ancestors, the way I held a cup could be seen in each sepia toned image. Their paths became mine, their wounds were my wounds. We played out scenes repeated like broken records and collected the reflections of those who came before us. Mary Bliss Parsons shared the same facial features as I did. I could see my grandmother in her and I could see me in my grandmother. Mary Bliss Parsons was tried twice during the witch trials. I carried a piece of her with me, from my haunts as teenager in Northampton to the seizures we shared.

Under the willow tree I spoke softly and watched clouds darken from white to grey. The willow was once my Mercury, it could be trickster or messenger depending on the morning or evening attended. Over time it’s branches swept across my face cleansing sorrows until light drifted over and all I could smell was where river met sea. It is not a mournful place but one of joy. I lay my head on the ground absorbing the pulse from beneath layers of soil and history. The Lighthouse to my right and the panopticon to my left. While Mary never came to New York, I thought of Mary like me. 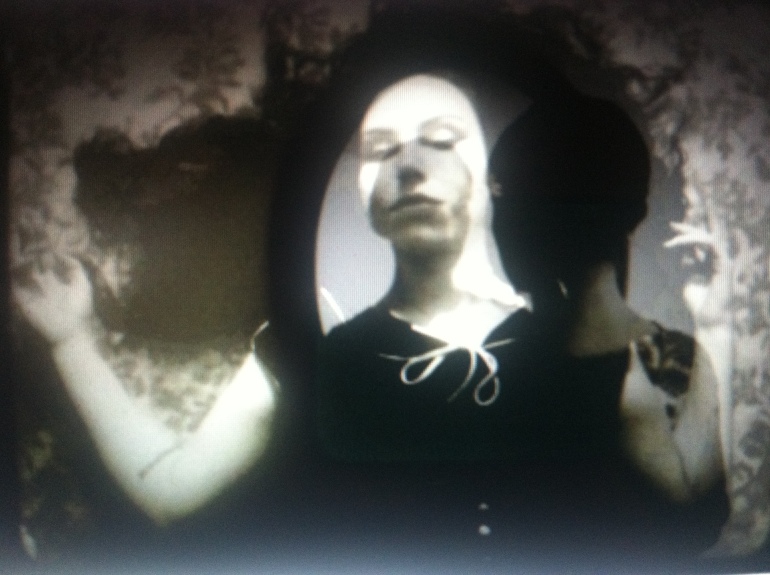 The sky opened but didn’t crack. It was the rain before the storm. It was the one to let me know it was coming. It was slight and delicate, enough to know it was a series. I lit the candles in the garden. The old Saint statue was crumbled from weather and greens. From light, darkness grew and in it a tiny spark grew once again. The candles flared and flickered. The black candle danced and spit. There is a beauty in breaking things. The storms break ruts. Wax absorbs and releases. Flame dances can be read and deciphered. Two sets of ancestors battling to come through, one in other languages and one of puritan form, the merging of two sides for one justification.

“Say it with me, Amriya (Armaya)-curse.  Say it softly as it slides off the tongue and into the ground.  We won’t walk that path as pretty as the language sounds.  We will not walk that path.  Baxt hai sastimos tiri patragi. But we did walk a long road over years, scattered with dust and the remains of something very broken.  Your ghosts and my ghost they spoke in whispers.  “I am not the curse.”  Everyone pointed fingers and yet we have all said “A tear in the eye is the wound of the heart.” and so we walk on bruised, bandaged and bleeding.  We walk on like soldiers in the night.”

Outside the wind howled. Inside I propped the new cane against the wall. Restlessness shook my body. It’s a bad thing to feel the dampness in your bones. I wanted to travel now. I wanted to be on dirt roads. I called The Good Sister Enable.

“You’ve got to take that prayer cloth and hold it, let your tears fall and you say those prayers over it and into it. You say them until that cloth gets so hot it falls out your hands that it’s burning with those
desires.” 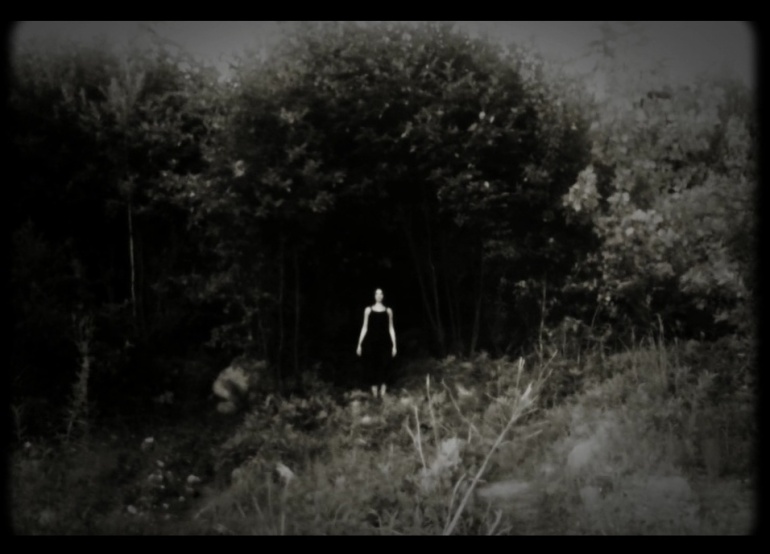 The black candle had burned out and the crossroads eagerly excepted it’s remains. The good Sister was reading bible verses again, Ezekiel 38:22 and sent the message. In ten minutes time another storm, in another city far far away blew in. It was coming, not the end of days, but someone’s days. I collected the water and washed a poppet I had made. Somewhere someone was pretending everything was okay. The candles flared and flickered. The black candle danced and spit. If they were trying to resist it wasn’t working and soon the sky would open flooding the land and streaking the sky with light while both heaven and hell pounded their drums and chests. Down the road, laying face to sky I found my father standing over me. Daughter of both Fortune and Fate, “I can work both sides.” I said raising my hand to the sun. And there it was in the open, no good, no evil, neutrality at it’s best.

“There is no contract. By working the good book you work both for and against me. You work both for and against him. But nothing is against us. It’s 50/50 on these roads. Both up there and down here it’s an equal divide. All of it’s justified.” He shook my hand and I saluted the sky. The leaves turned belly out. The storms would be here soon. The sky would break and he would say “It is broken like me.” and I would collect the thunder water breaking him again because I could and it was needed. When Sister opened the good book she read the passage from Ezekiel 13:8 and it was understood that all would be shattered.

The wind was angry now. She howled outside pushing the plants and snapping branches from small trees. I tended to candles. The black candle flame remained small until the small poppet was encased and then it grew full fulfilling it’s duty. Small signs told me so, broken string, a dropped tool, a chain, crab shells, and two dead fish. All of these small and symbolic, meaning nothing to anyone but me. I lit the white candles and they melted quickly leaving puddles of wax tears behind them. Soon the skies would open. Soon my job would be done. I whispered sweetly into the white wax candles, “I’m leaving a trail of sweet grass for anyone who wants to find me. I’ll tie it to fences as I travel with ribbons and one gold coin and then you too can travel this road.  But I must warn you that this path is not an easy one to walk. There will be bumps, ditches. People will call you names and close their doors to you. But if you listen close enough and the wind calls your name then you too can travel with me and I can tell you that there is a sweetness in that alone. And then, then those doors will open.”

I opened the good book and placed my finger down. The twigs of the cedar tree would be brought to the marketplace and left in bundles. The seed of the land planted like willow by abundant water would spread creating roots. This is what the good book told me and so I collected the branches and bundled them with twine. While cedar protected against lightning the willow was sympathetic to the plea.The poppet on a separate journey would be placed in the river. A man would see the interaction and a sign would be given that all was well. I walked old streets with new markets. I remembered the days of
flickering streetlights and broken glass. The remnants of my friend’s former home became cinder blocks being pushed through the windows of my former home. I didn’t know what to think of this, ghetto turned prime location.  The Inferno isn’t filled with fire. It’s filled with memories and dilapidated buildings. It was built on pavement leveling layers of history and patching the cracks with cement, therein concealing it’s former existence. The inferno buries its history with skyscrapers and low income housing few can afford. The inferno doesn’t want you to sense the layers. It only wants you to feel the void. This is the curse of the land.

I walked into the old temple. I roamed the halls touching old stone and tracing my fingers along glass. It was the stained glass in the chapels that spoke, the carvings, the tapestries with years of history, blood, and toil weaved into them that expressed their language wholly. In the halls echos of voices. It reminded me of the small town in Canada haunted by radio airwaves. In the garden I touched poison. By the deadly nightshade were the bittersweet berries known as woody nightshade. I remembered their taste. The wind had become calm and gentle, the way she gets right before change occurs. I lit the white candles on jars of honey, so many hopes and wishes crammed into sweetness with locks of hair and photographs. I said a prayer for each of them blowing three times before lighting the match. Seven in all. Two, zero, one, four. That year was a seven year. 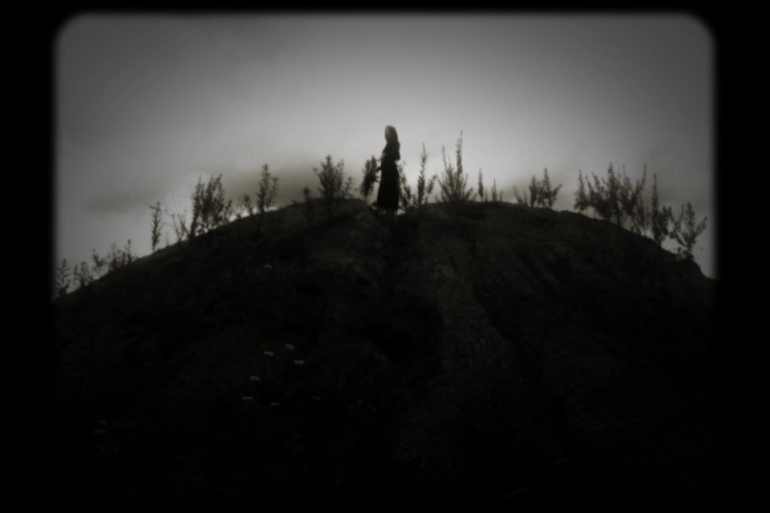 “She’s made friends with the Devil. They say she is a witch.”